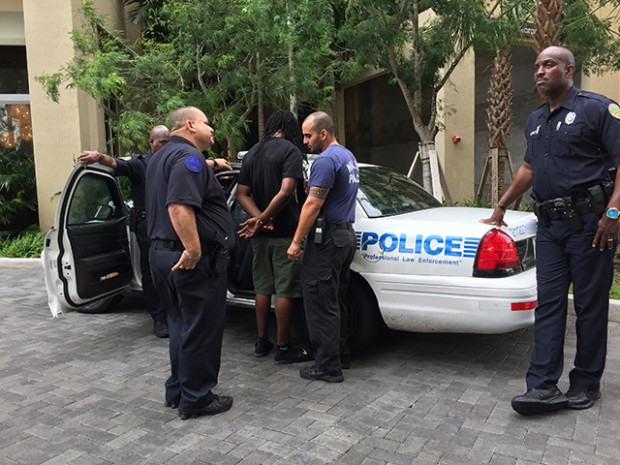 Once in a while, even if you’ve got extensive security measures in place, thieves find a way. Such was the case recently a monitored residential property located in the Southeast US.

During daylight hours on a Saturday a couple of weeks back, they had several computers stolen from a lounge area. With no cameras in the room, and other nearby cameras not yet “armed” to generate analytics-driven alarms, the thieves were able to smuggle around $10,000 worth of towers, monitors, and printers out of the building using large bags and suitcases.

Forensic review of the video showed as many as four people involved, and produced excellent facial images of the suspect who appeared to be running the operation. One of Viewpoint’s Business Development managers – knowing that these types of crimes are typically not committed at random locations – then went a bit “rogue” on us! (But with great results!)

With print-outs of the identifying images in hand, he conducted his own stakeout. He figured that the responsible individuals were somehow familiar with the property, thinking they were maybe relatives or friends of a resident. Following that trail of thought, he figured that at some point, they’d be back.

It didn’t take long for his suspicions to ring true. Within a few hours of launching his stakeout, he spotted one of the individuals on-site. After rounding up some witnesses who had seen the suspects the day of the robbery, police were called in and the man was arrested. Between prints left at the scene, the CCTV footage, and the recovery of some of the stolen items, he now faces pretty ironclad larceny charges.

While we certainly don’t encourage our Business Development staff (or anyemployees, for that matter) to take matters into their own hands, there are a lot of great take-aways from this story:

1) Make sure your cameras are monitored. Even though the theft was not stopped while it was in progress, the property’s CCTV system was instrumental in identifying and capturing those responsible. They weren’t careful when they passed by cameras, which resulted in clear images of their faces.

In short… we sort of lucked out!

That said, this is the exception, usually, and not the rule. Most criminals are aware of the presence of cameras, such as our “ghost burglar” friend from a past blog. The majority of the time, would-be thieves will shield their faces with a hood, mask, or hat. A $2 bandana can easily defeat a $100,000 camera system when no one is monitoring it. This usually results in a business owner having nothing but excellent footage of an unidentifiable criminal robbing them blind.

In case you need a refresher, here’s the ghost burglar video:

This sort of situation rarely comes up with monitored systems, because they’re being viewed in real-time, and any suspicious situations are dealt with immediately.

2) Use the information your CCTV system and/or your monitoring company provides. All too often, lack of follow-up at the site level results in criminals getting away scot-free. If you have useful information from your monitoring company or good images from your cameras, use them to try to track down and identify those responsible. Post images of suspects, talk to employees or residents, and if necessary, use our Business Development manager’s example as a way to crack down on criminals, even after-the-fact. Monitoring works best when people at the site level are involved and engaged. Without that critical element, the entire security strategy is compromised.

3) Make sure your cameras are working and recording. We’ve seen it time and time again… a potential client will ask us to evaluate their CCTV system, and we’ll find it’s barely functioning. One nice peripheral advantage to monitoring is that someone is “touching” your system multiple times a day, ensuring that everything is working, and addressing issues when they inevitably come up. Without the footage obtained in this case, those responsible would have never been identified.